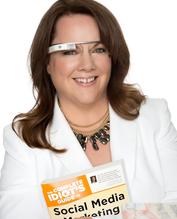 She’s been called everything from a “creative visionary”, “idea maven” and “sales superstar”.

Having worked as an award winning executive for The Washington Post Company for 14 years, and then in the .com arena for 7 years, in 2007 Jennifer left to venture out on her own.

Today, she is  known as  America's Premier Social Marketing Stylist.  Jennifer is the 2x national author of the ever popular-Complete Idiot's Guide to Social Media Marketing.  As such, she has impacted the business momentum of thousands of entrepreneurs and small businesses owners since 2007.

She owns two business, The Sales Lounge.com where she advises entrepreneurs on sales & marketing,  and www.sociallydelivered.com which is a global social media concierge boutique serving businesses worldwide.

Jennifer "speaks" daily to her 10K + loyal social media following with high content/ high value contributions via @SalesLounge on Twitter.  A true social business thought leader and audience favorite, Fast Company calls her "the real deal" and those that know her say she's a true social business visionary.  Jennifer and her business tips have been seen in:  Success Magazine, Fast Company, ABC News, Al Jazeera America, MSN Money, SmartCEO, USA TODAY, Huffington Post, Working Mother Magazine and many other media outlets and she speaks at conferences around the country.