Season seven AMERICA 'S GOT TALENT Semi Finalist!!! Howard Stern - " I really enjoyed your magic .. well done! " Sharon Osborne - " Very professional ... Absolutely Flawless ... You raised the bar! " Howie Mandel - " You've got talent ... It was truly a great magic act! " Puck started in entertainment with a specialty in Bird Magic. Working with doves, parakeets, and a parrot named "Hoppy" he began his journey. This seven minute act took Puck around the world and was celebrated with several awards including 1ST place at The World Magic Summit held in the Nations Capitol. Puck has been featured at such venues as The City Hall Theater in Hamilton Bermuda to The Magic & Mischief Theater in Orlando, Florida. He also performs on the high seas for luxury cruise lines like Holland America , Norwegian, Carnival, and Princess. He's a regular performer at Monday Night Magic, New York's longest running magic show as well as the world famous Magic Castle in Hollywood. You can tell by watching Puck perform that he truly enjoys what he does. What better gift in life then to do what you love as a career. This native New Yorker now resides in Central Florida with his wife and three children performing his special brand of Magic all around the world. 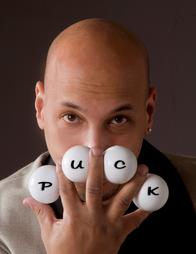